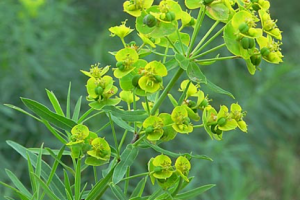 A long-lived, deep rooted perennial adapted to many habitat types in Montana. It has invaded over 2.5 million acres in the western US and Canada. It is found in every county in Montana. The flowering plant grows up to three feet tall on a slender stem with long, linear narrow leaves that alternate along the stalk. The stem and leaves emit a milky latex substance when damaged which can be an irritant to the skin. The plant flowers in mid-June with yellow bracts above green flowers. 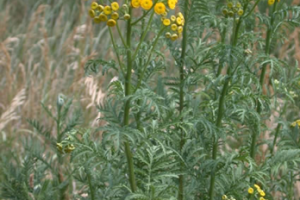 A robust perennial that grows up to five feet in height, Common Tansy has aromatic, fern-like leaves. It flowers in July in Montana, producing flower cluster on top with button-like yellow heads.

Considered toxic to horses and cattle, tansy is un-palatable to livestock but can be an issue if cultivated in hay and consumed. The oils in the leaves can cause skin irritation and ulcers in humans so gloves should always be worn if pulling live plants.

The pilgrims brought common tansy seed to the United States as early as 1631, because of its many medicinal uses… In the 1600s, the Massachusetts governor called common tansy a necessity… and encouraged even more extensive planting in the garden… Europeans and colonial Americans used common tansy in a face wash to lighten and purify skin, to treat ulcers, constipation, and hysteria, to restore menstrual flow, treat intestinal worms, rheumatism, jaundice, and digestive problems, and in large doses to induce abortion [women have died from this] but in smaller doses it was thought to prevent miscarriage and increase fertility… The northern Cheyenne of Montana called common tansy “yellow medicine”, and its leaves and flowers were made into a tea and given to those feeling weak.

Tansy spreads by seed and by an extensive root system. Pulling or mowing has little effect on tansy, except to reduce seed production. Most of the big roots are near the surface, so it may feel like you can pull up smaller plant roots and all, but it almost always comes back again and again. Tansy regenerates from root fragments, so cultivation could expand the size of an infestation.

Tansy can be controlled effectively with herbicides designed to kill the extensive root system. Treated stands of tansy should be monitored for new growth coming from the root system and treated accordingly. 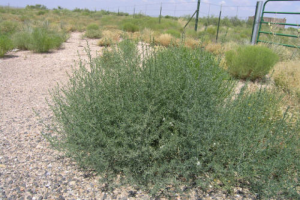 Introduced to the Unites States In 1873 by Russian immigrants, Russian thistle is a common sight along roadways, corrals, and construction sites in Montana where there is bare, disturbed soil. Informally called “tumbleweed”, the plant breaks off of its stem in the fall and rolls across the landscape spreading seeds. Montana fence lines, corrals and ditches are littered with the woody stems and balls of Russian thistle every winter. Tall, with reddish or purple stems, the Russian thistle does not do well with competition in well managed pastures. Its seed base is short lived, only about a year. It can be managed with herbicides and spring and early summer applications are recommended before the plant becomes mature and woody. 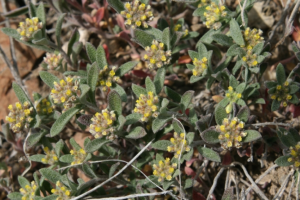 A member of the Mustard Family, like Hoary Alyssum it is an early bloomer, appearing in late April and May.  A short plant, 2”-6” which spreads throughout grasses, especially in poor soils. Heavy infestations will appear as a yellow carpet in lawns and pastures. Mowing is generally not effective as the plant will flower below the stubble level. It spreads by seeds which it produces in prolific amounts. April and May applications of herbicides containing metsulfuron are effective, however multiple year treatments may be required to eradicate the seed base. 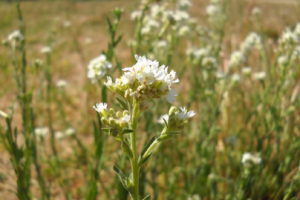 This weed is common in SW Montana and is often confused with whitetop. A member of the mustard family, Hoary Alyssum is one of the earliest weeds to appear in the spring, often beginning to flower as early as mid April. It reproduces from seeds only and can germinate and re-seed throughout the growing season. Plants flowering in May through June will germinate and produce seedlings that will mature and seed by early fall, so early treatment is recommended.  Most seeds fall near the parent plant resulting in large patches of localized infestation. Contamination of forage of more than 30% hoary alyssum is toxic to horses causing laminitis, edema, diarrhea, and hypovolemic shock.  Controls include herbicides and hand pulling. Mowing is effective if done frequently and kept to a six inch or less stubble. Infrequent mowing can increase infestations by spreading seed. There are no known biological control agents. It flourishes in poor, overgrazed, and dry soils. Generally, due to the seed bank and reproductive nature of the plant, it will require multiple treatments to eradicate. 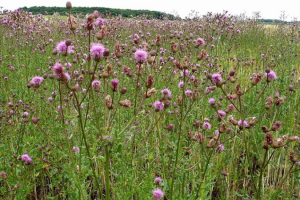 Spotted knapweed is a serious threat to the rangelands of the western United States. It was probably introduced to North America from Europe as a contaminant in alfalfa seed or in ships’ ballast. A common invasive weed in much of Montana, Spotted knapweed grows best along ditches, field margins, over-grazed pastures, and in disturbed dry, arid soils.

Spotted knapweed produces its own natural herbicide called “catechin” that eradicates plants around it. Each plant can produce 300 flower heads and 140,000 seeds. In the correct conditions, it spreads rapidly. Knapweed grows in a bush like plant up to four feet high. Its flowers are usually a lavender color but can range from pink to purple. Large infestations appear as a continuous hazy purple mass.

Spotted knapweed plants are generally short lived. They spread primarily by seeds, which can remain viable in the soil for up to eight years.  Control with herbicides can be effective while the plant is young through budding stage. Generally, June is an effective treatment month. Herbicides which provide residual control are the most effective in hindering re-growth.

Some biological control insects have proven to be effective in the management of knapweed. Root boring weevils and flower head eating bugs, when combined properly, can reduce knapweed densities but generally will not eradicate the plant. 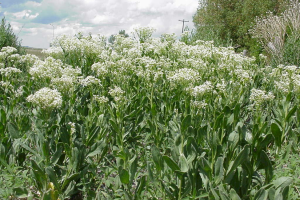 Another member of the mustard family, Whitetop is a long-lived perennial that spreads by creeping roots and a prolific seed base. It grows up to two feet in height. It is often confused with Hoary Alyssum. While Hoary Alyssum generally produces a long stem with small elongated leaves and two to three branches each with a single flower, Whitetop stems have broader, clasping leaves below a branch of stems culminating in a flat umbrella of small, four petal white flowers. A large infestation of plants will create a solid white appearance. Controls include mowing prior to and during flowering, grazing by sheep, cattle and goats, and some herbicides.  Herbicides such as Escort XP or Opensight containing metsulfuron or chlorosulfuron are effective when combined with a non-ionic surfactant. 2,4,D will kill plant tops but not the root systems. A heavy seed base will require multiple treatments to eradicate. Each plan can produce up to 3000 seeds annually. 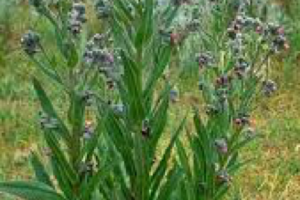 This biennial plan reproduces from seeds only and lives for two years. Each plant can produce 2000 seeds per year. The sticky burr seed pods, also called beggars lice, are easily spread by wildlife and livestock. Rosettes of dark green, hairy leaves begin appearing in April and May with the plant flowering by July. 1-4’ tall, it produces small, reddish purple flowers prior to seeding.

Houndstongue carries an alkaloid poison that can kill livestock through loss of production of liver cells. Animals won’t normally graze on it, but if cured in hay, it will remain toxic. Sheep are more resistant to this plant than cattle and horses. Horses are especially susceptible and symptoms of houndstongue ingestion include loss of weight, diarrhea, convulsions and even coma.

Hand pulling individual plants will help control weed spread. You should not allow these plants to go to seed. Metsulfuron (Escort, Opensight)  at 1-2 ounces per acre is effective on houndstongue any time the plant is actively growing, basically prior to late July.  First year rosettes can be controlled with 2,4-D at 2 pints per acre in spring, but second year plants are not controlled well with 2,4-D.

This is an extremely common weed in Montana and one that can be hard to eradicate. The plant has an extensive root system descending over 15 feet deep in the soil. It puts out horizontal root runners which are the number one method of spreading.  Each plant also produces over 1500 seeds per flower which are light and easily borne by the wind. A Canadian thistle can regenerate from a piece of root just .025 inches long and .0125 in diameter. Its seed base typically lasts 5-7 years. Due to the extensive and hardy root system, the effective management of the plant is either repeated mowing during active growing periods for several years to prevent flowering and re-seeding, or herbicide applications in spring and early summer prior to flowering. It is critical to use an appropriate herbicide which will kill not only the vegetation but the root system. Herbicides, such as Opensight and Milestone which leave a residual in the soil for seed control improve the effectiveness of the herbicide and accelerate control.

New rosettes will appear and be actively growing in the fall if the plant receives adequate moisture and prior to dormancy due to freezing. Applications during this window can be effective as well.